For nonwoven fabric manufacturing, purified cotton webs can be formed using two processes. These processes are known as carding and airlaid/drylaid. First, purified cotton is packaged in approximately 500-pound bales where the fiber is densely compressed. These bales are how the fiber arrives at the nonwoven fabric plants. The bales are opened and the tightly packed fiber is opened by fiber-opening equipment.

After opening, the fiber is made into a uniformly opened batt which is fed to one of two web-forming machines: a card or an air laid, which is sometimes referred to as a drylaid former. These web formers will work for all natural or synthetic staple types of fibers. The fiber web produced would then be fed into the nonwoven bonding technology (hydroentangling, needlepunching, thermalbonding, etc.) that will produce the fabrics.

Card machines have been around for many decades and have been used to produce webs used to manufacture yarn. The card will feed in the batt using a slow sawtooth wire-covered roll to the main cylinder that is also covered in sawtooth wire, but traveling at a much higher speed. The main cylinder will move the fiber very fast by stationary plates that are also wire-covered. The gap between where the carding action takes place—the cylinder and the stationary plates—is very tight, as close as 0.010 of an inch. This opens the fiber individually and combs them so the length of the fiber is oriented in the same direction the cylinder is moving (machine direction). At the exit, a slower wire-covered roll removes the web of fibers from the main cylinder to a conveyor that will take them to bonding.

The fiber carding action occurs between the cylinder and the stationary flat.

Note the feed matt or batt is fed in from the left side. The fibers are carried around the large main cylinder over the top by the stationary flats and removed as the card web on the right where it is deposited on a conveyor that leads to nonwoven bonding. 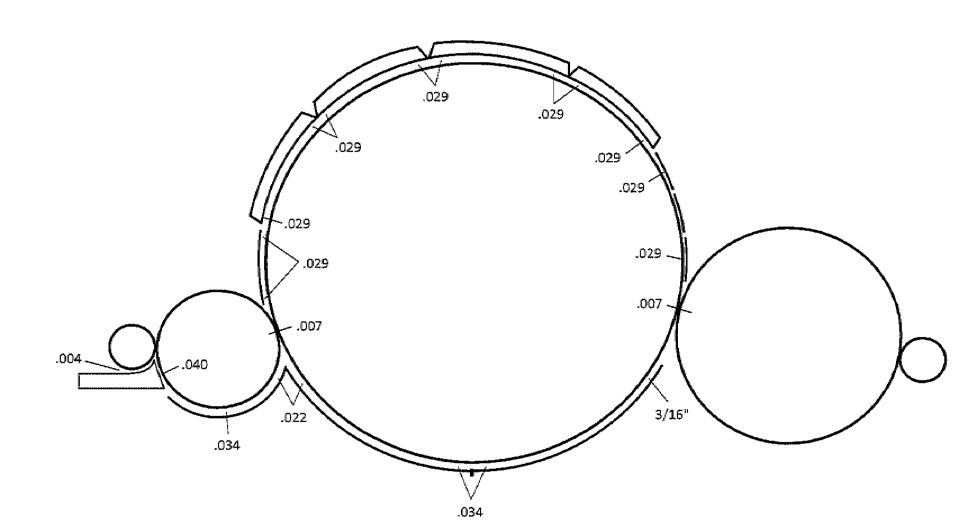 Card machines can produce a web weight range between 0.75 to 3 ounces per square yard. Bonding the web to produce a nonwoven fabric doesn’t change the weight very much. If heavier fabrics are desired, then cards can be run in tandem where the web from one is layered on top of the other, or the web can be crosslapped.

The Airlaid or Drylaid Process

The steps are much the same as carding with wire-covered rolls that open and orient the fiber. However, instead of using a wire cover roll to remove the fibers from the cylinder, a wall of air blows them off. The fibers and air blow onto a collection drum that has negative pressure inside the drum. The air is pulled though the drum and the fibers are collected on the outside of the drum where they are removed as a web. Because of the air turbulence, the fibers are no longer in any ordered orientation. The web, when bonded, will produce a fabric of equal strength properties in all directions.

#2 and 3 The fibers are opened by the sawtooth roll.

#5 and 6 The fibers are removed from the roll by air and here they are randomized in fiber direction.

#7 The perforated belt (perforated can be a drum) has negative pressure and pulls the fibers to the belt. Since they are too big to go through, the fibers are deposited on the moving belt/drum and exit as a web.

A Rando web former is used for staple length cotton, as well as natural and synthetic fibers. There are also other airlaid machines, but they are geared for short staple fibers. That means longer cotton fibers can’t be used.

A Rando web former can produce webs ranging from 0.5 to 6-7 ounces per square yard. Again, if heavier weights are desired, the Rando’s could be placed in tandem.

Cotton Can be Blended with Any Other Staple fiber:

100% purified cotton webs can be produced using either of the web-forming methods, and purified cotton can be blended with any other type of staple fibers, whether they are natural or synthetic. This will allow production of fabrics containing one or more fibers.

Stay in the Know

Receive product updates and industry news straight to your inbox.

Cotton has a strong record in sustainability. Learn more »

Barnhardt has a strong history of innovation. Learn more »